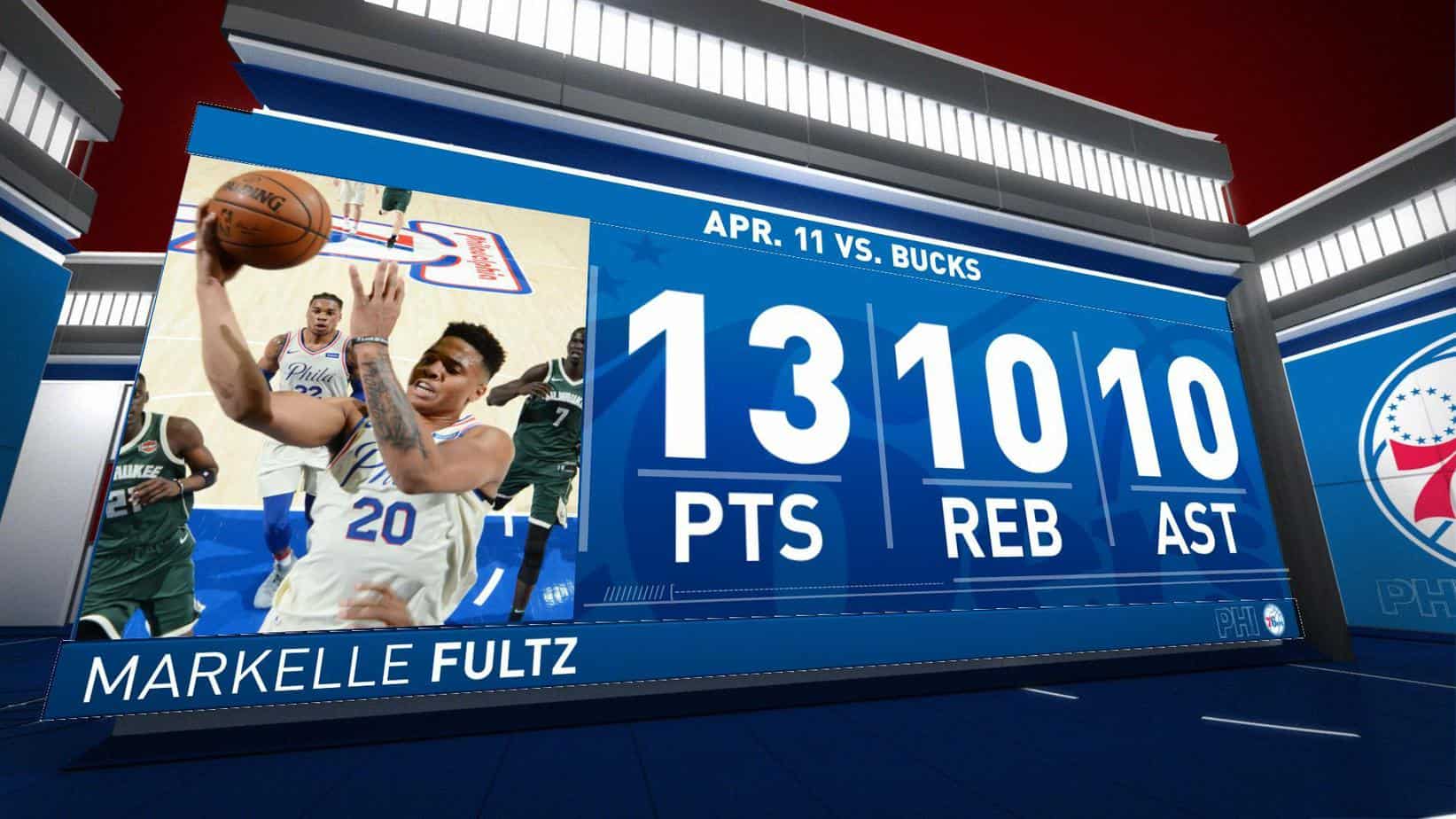 Besides winning matches and championships, there are other statistical categories in the NBA that spectators and players pay attention to. Team results are very important but individual results determine a lot for players’ status.

Scoring, rebounding, steals, blocks and assists are inseparable from basketball. These indicators make up the whole statistics (if we do not include negative ones such as personal fouls and turnovers). After the 1979-1980 season in the NBA, the triple-double became an officially recorded statistic and is one of the best individual achievements for players.

The Essence of Triple-Double

A triple-double means that in one match a basketball player scores 10 or more points, assists, blocks, steals, and rebounds. That is, a triple-double is a situation where a player, for example, scored 13 points in one match, made 12 assists and 10 block shots. These categories could vary. A player doesn’t need to have 10 points specifically, as soon as, he meets the requirements in the other ones. The first triple-double in the NBA was achieved by Andy Phillip of the Philadelphia Warriors, scoring 17 points, 10 rebounds, and 10 assists.

However, frequently, one of the indicators in triple-double are points as they are the easiest to collect. The only time in NBA history a triple-double was achieved without points happened when Draymond Green collected 12 rebounds, 10 assists, and 10 steals with just 4 points.

In addition to the triple-double, there is also something called double triple-double. This term applies if the player has scored 20 or more points in three categories, for example, 20 points, 20 rebounds, and 21 assists.

Chamberlain was a man of records. He is also the only player to have collected what is called a perfect triple-double three times, which is accomplishing this feat without missing a single shot. In 1967 Wilt had 42 points, 30 rebounds, and 10 assists, making all 18 shots from the field.

Is there anything better than a Triple-Double?

In total, there have been 5 cases, when players managed to accomplish quadruple-double. Nate Thurmond (1974), Alvin Robertson (1986), Hakeem Olajuwon (twice in 1990), and David Robinson (1994) had this incredible result. Many players got closer – like Draymond Green, but unfortunately, the latter was unable to score 10 points, which is surprising.

The concept of quintuple-double is the same but a player must have double-digits in every category. It remains the highest personal achievement in basketball, which can be obtained in one match. Currently, in the history of professional basketball, there have been no cases of a quintuple-double. In fact, at the level of the professional game, it seems impossible to achieve such a feat. Legendary Hakeem Olajuwon was the “closest” to quintuple-double, lacking 1 assist and 5 steals.

In amateur basketball, however, there have been cases of achieving a quintuple-double. It is well known that the quintuple-doubles were recorded in the matches of the U.S. school championship among girls in 1997 and 2012.

Who is the All-Time Leader in Triple-Doubles?

The maximum number of triple-doubles still belongs to Oscar Robertson – 181 triple-doubles in the regular season. No one has ever exceeded that number, given that Robertson announced his retirement in 1974. Until the 2016-2017 season, Robertson was the only player who averaged a triple-double per season, with Russell Westbrook (150) becoming the second one. Westbrook managed to repeat it for three consecutive seasons. The latter will likely surpass Robertson in the list of all-time leaders.

In the playoffs, Magic Johnson leads the list with 30, while LeBron James is second with 28 triple-doubles. Considering that James is playing there almost every season, it is only a matter of time before The King breaks the record. LeBron is already a leader in the Finals, already hitting 10 triple-doubles.

LeBron James and Russell Westbrook are the only 2 players in the history of the NBA to record triple-double against every team they have played against. LeBron became the first one in 2019 and in January 2020 Westbrook became the second – achieving this milestone against his former Oklahoma City Thunder.

On 10 May 2021, Russell Westbrook passed Oscar Robertson’s all time NBA Triple-Double record of 181 triple-doubles when he recorded the 182 triple-double of his career vs the Atlanta Hawks. Oscar Robertson played until he was 35 years old, Westbrook is currently 32 and could easily play for another four or five years. Therefore, Westbrooks record for Triple-Doubles could increase significantly before he hangs up his kicks for good.

We have gone through the data at Basketball Reference and broken-down Westbrooks path to becoming the all-time NBA leader for Triple-Doubles. Westbrook made his first Triple-Double on 2nd March 2009 against the Dallas Mavericks. Westbrook recorded 17 points, 10 rebounds and 10 Assists.

The previous record holder of the most triple doubles in the NBA was Oscar Robertson who ended his playing career in 1974, fourteen years before Westbrook was born. Robertson had held the record for 47 years; with little indication it would ever be broken. During that time some of the greats of the game, Michael Jordan, Larry Bird and Kobe Bryant, tore through the league and came nowhere close to Robertson’s record. It took 13 career years for Westbrook to beat Robertsons record and we look at the detail of how Westbrook broke the record.

There is a common misconception that Westbrook is a one-man team and that although highly successful at getting triple-doubles, his teams suffer because of this. However, of his 182 triple doubles, Westbrook got 135 triple doubles in wins over opponents and only 47 of his triple doubles came in losses against opponents. This means that when Westbrook gets a triple double in a game, he also has a 74.17% win ratio. Which would put any franchise near the top of the NBA standings in almost any season on record – the equivalent of a 61 win season.

A lot of this criticism centres around his “stat padding” specifically “rebound hunting”. The theory goes that as a Point Guard he shouldn’t be averaging more rebounds in a season than a giant man mountain like Steven Adams. Does he encourage his centres to allow him to cherry pick all the easy rebounds? The best counter to this given his winning record is that as a Point Guard who launches eviscerating transition attacks, the sooner he has the ball in his hands – the better for his team.

182 triple doubles is a marvellous achievement however, you may be wondering which team did Westbrook have the most and least success against when it comes to recording triple-doubles. Ironically, Westbrook has scored the most triple-doubles against one of his previous teams, the Houston Rockets posting Triple-Doubles against them on 11 occasions. The Portland Trail Blazers and Indiana Pacers are Westbrooks second and third most frequent victims, hitting them both 10 times with Triple-Doubles. The two teams against who Westbrook has registered the fewest triple doubles is the Boston Celtics and (inexplicably?) the Charlotte Hornets. Westbrook has managed to score a Triple-Double against every team in the NBA – with his final victim being the Oklahoma City Thunder for who he played his early seasons for.

What’s the difference between a Triple-Double and a Double-Double?

The triple-double demonstrates the versatility of the player and his activity during the match. It also speaks about the professionalism of the athlete.

A double-double is an achievement when a player scores 10 or more in 2 out of 5 categories. If, for example, 10 points were scored and 10 blocks were made, and all other indicators were equal to 0, the double-double will still be counted.

Triple-double is actually the same term, which differs only in the fact that 10 points, rebounds, assist steals, or blocks need to be scored not in 2 categories, but 3.

If a double-double is a very common occurrence, a triple-double is usually considered a very serious achievement. However, with time and the development of the NBA, triple-doubles have also become a common thing for players.

Who is the Youngest/Oldest player to achieve a Triple-Double?

The youngest basketball player who managed to make a triple-double is LaMelo Ball at 19 years and 140 days in January 2021. At 40, Karl Malone currently remains the oldest player to achieve such a feat with 10 points, 11 rebounds, and 10 assists.

link to How Do NBA Games Work?

So you finally found yourself with nothing much to do on a Saturday night or got invited over to your friend’s house or better yet, on a date in an arena, and you have no idea what the fuss is all...

Continue Reading
link to How much do NBA coaches make?

Coaching in the NBA is replete with responsibilities. Being a coach in the NBA is difficult, but at the same time very prestigious and profitable. How much do NBA Coaches make? As of 2021 coaches...