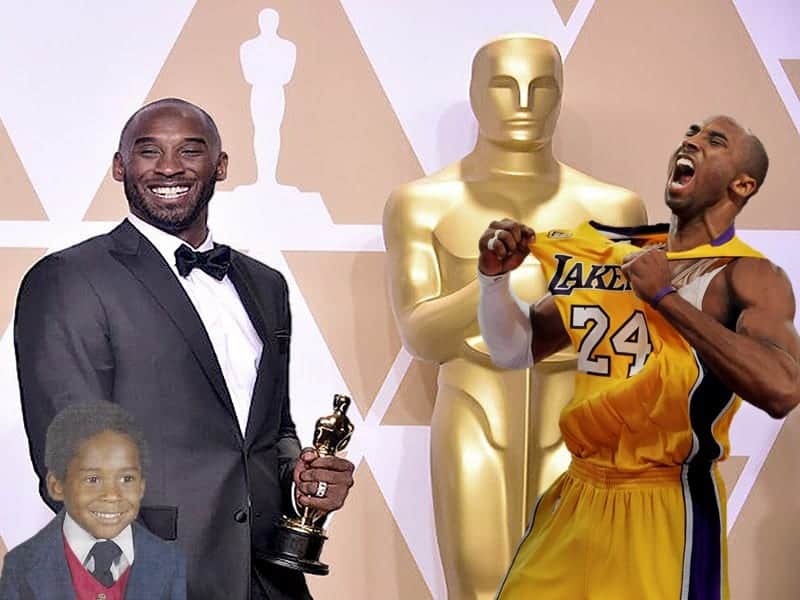 NBA basketball players have featured in movies for a long time, who could forget Shaq in Blue Chips or Ray Allen in He Got Game. You may be wondering has an NBA superstar ever won an Oscar?

Kobe Bryant won an Oscar for Best Short Animated Film in 2017 for Dear Basketball. Kobe produced the movie and therefore, received an Oscar for his work. Dear Basketball is an animation of the letter that Kobe wrote on announcement of his retirement from basketball. His Academy Award win had huge significance, as Kobe was not just the first professional NBA player to win an Oscar, but the first African American to win in the category of “Best Short Animated Film” as well.

How did Kobe Bryant become a Producer of Dear Basketball?

On 29 November 2015 Kobe announced to the world that it would be his last season in the NBA. In this day and age of social media, Kobe penned a letter which was uploaded to the internet announcing his retirement from basketball after twenty successful years in the NBA. Following Kobe’s Letter being published he informed the world that he was a visual person and that his letter, was a thank you to the sport he loved so dear. In the months following the publishing of the Letter, he spoke with Disney animator Glen Keane (Beauty and the Beast, Aladdin). The pair discussed making the letter into a short animation which would be shared with the public and would hopefully inspire a younger generation to work for their goals. John Williams, who created the music for cultural juggernauts such as the Star Wars Franchise, E.T. and Saving Private Ryan, was brought in on the project to compose the music for the piece.

What is the Synopsis of Dear Basketball?

Dear basketball tells of the love affair that Kobe had with basketball from the time he first started playing at six years old up until his retirement. The film starts with an animation of Kobe Bryant playing for the LA Lakers where he is draining the final bucket in a tight game for the win. The film moves to when Kobe was a youngster and he used to roll up his dads socks and imagine shooting game winning shots. Kobe explains that he knew he had fallen in love with basketball from an early age. The film shows Kobe falling more in love with the game and watching highlights of the great basketball finals such as the LA Lakers and Celtics rivalry. The film shows how Kobe trained to get better at the game to develop into the player he wanted to be. The film reflects on some of Kobe’s spectacular moves throughout his career. The film then highlights Kobe’s injuries later in his career and explains how his body can no longer play the sport he loves so dear. The film regresses to a young Kobe playing with his dads socks against imaginary NBA players. The film ends with a young Kobe shooting the game winning shot with his dads socks before evolving into who he is today. The film ends on an emotional peak with Kobe leaving the court and walking down the tunnel to a fade.

Who Wrote the Script to Dear Basketball?

The script of Dear Basketball is the letter that Kobe posted in the Players Tribune on the 29th November 2015. The letter is as follows:

From the moment I started rolling my dad’s tube socks And shooting imaginary Game-winning shots In the Great Western Forum I knew one thing was real:

I fell in love with you.

As a six-year-old boy Deeply in love with you I never saw the end of the tunnel. I only saw myself Running out of one.

And so I ran. I ran up and down every court After every loose ball for you. You asked for my hustle I gave you my heart Because it came with so much more.

I played through the sweat and hurt Not because challenge called me But because YOU called me. I did everything for YOU Because that’s what you do When someone makes you feel as Alive as you’ve made me feel.

You gave a six-year-old boy his Laker dream And I’ll always love you for it. But I can’t love you obsessively for much longer. This season is all I have left to give. My heart can take the pounding My mind can handle the grind But my body knows it’s time to say goodbye.

And that’s OK. I’m ready to let you go. I want you to know now So we both can saviour every moment we have left together. The good and the bad. We have given each other All that we have.

And we both know, no matter what I do next I’ll always be that kid With the rolled up socks

What was Kobe Bryant Acceptance Speech?

After winning his Oscar for Dear Basketball Kobe had the following acceptance speech:

“As basketball players we are meant to shut up and dribble but I’m glad we did a bit more than that. Thank you, Academy, for this amazing honour. Thank you, John Williams, for a wonderful piece of music, thank you Brizen for believing in the film. Thank you, Molly Carter, without you we wouldn’t be here and to my wife Vanessa, our daughters Natalia, Bianka and Gianna you’re my inspiration. Thank you so much guys, thank you.”

What Movies or TV Shows has Kobe Bryant Starred in?

Earlier in his career Kobe starred in a number of teenage television shows. He appeared in an episode of popular 90’s kids show, Hang Time, when the teens of Deering High School get hustled in a basketball game. Their coach calls a favour and Kobe Bryant turns up to help the kids of Deering High out.

What other NBA Players have been in Movies?

As mentioned above Shaq starred in ‘Blue Chips’ which is the story of an NCAA coach breaking the rules in order to acquire players to stay competitive. Since Blue Chips Shaq has starred in a number of movies within the comedy genre. Ray Allen appeared in Spike Lee’s social commentary ‘He Got Game’, which tells the story of the number one high school prospect trying to decide which college to choose. Kareem Abdul-Jabber appeared in Airplane with Leslie Nielsen. More recently Lebron James appeared in Train Wreck and plans to follow this up with Space Jam 2. Which brings us to The GOAT, Michael Jordan and his major movie contribution, the wonderful Space Jam.