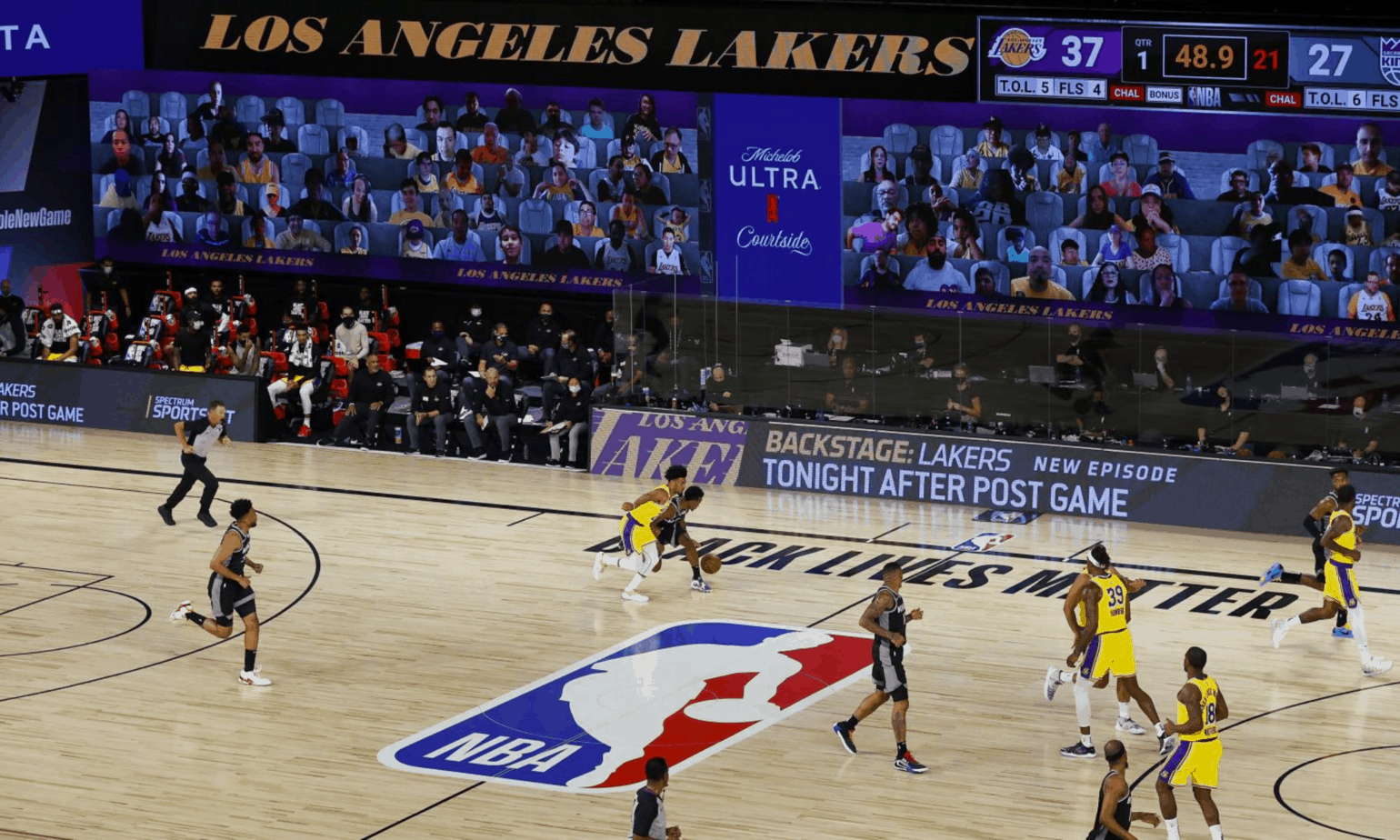 So you finally found yourself with nothing much to do on a Saturday night or got invited over to your friend’s house or better yet, on a date in an arena, and you have no idea what the fuss is all about with these two groups of gigantic men clad in matching colored outfits chasing an orange ball back and forth. Well, congratulations, you’ve finally gotten introduced to the glorious game of basketball, and if you’re lucky, arguably its most competitive league, the NBA.

How do NBA Games Work? An NBA Game is split into four quarters of 12 minutes. Teams have 15 players and 5 players are allowed to be on the court at one time. Each team has 24 seconds to make a basket.

Additional congratulations are also in order for finding this article because in about five minutes or so, you will have joined the multitude of loyal fans around the world who love the sport, are well-versed in its intricacies, and speak its one-of-a-kind lingo. Before getting there, however, let’s jump into a time machine and go back a little over 70 years ago to where it all began.

Currently, the NBA consists of 30 teams with 29 of those teams residing in the US and 1 in Canada. The 30 teams are divided in two conferences: the Eastern Conference and the Western Conference. The conferences are further subdivided into three divisions each.

NBA games are typically 48 minutes long and are divided into four 12-minute quarters. In order to properly understand and appreciate the reason for this, one needs to explore the history of the league and the game of basketball itself.

When basketball was invented by Dr. James Naismith in 1891, the scholar wrote 13 of its original rules to govern the way the sport would be played. Rule 12 provided that the time for the sport would be “two fifteen-minute halves, with five minutes rest between.” This format carried on into college basketball, where the halves were increased to 20 minutes instead of the original 15.

However, when the NBA, then the BAA, was gearing up for its inaugural 1946-47 season, the league’s stakeholders wanted to give fans their money’s worth by making the game around two hours long. They did just that by increasing the game by eight minutes and dividing it into four 12-minute quarters, which took the total game time, breaks included, to about two to two and half hours. Breaks between quarters 1and 2 and 3 and 4 are 130 seconds long and halftime is 15 minutes long.

A game may last past the prescribed 48 minutes if the scores are tied and there is no clear winner. When this happens, five-minute-long overtime periods are played to determine who emerges victorious. These overtime periods continue in case the scores are still tied after the additional five minutes lapse until the stalemate is broken.

During a basketball game, one will notice that the game clock, which is usually displayed above either rim and on the jumbotron, occasionally stops. This may happen for a number of reasons including when the basketball goes out of play, if an injury to players from either team or an official/referee occurs or if players are being substituted into or out of the game.

Mostly, however, stoppages occur when a referee calls a foul or a violation of rules. This is mostly followed up by the taking of either one, two or even three free throws depending on the violation. Stoppages also allow officials to review plays in specific instances of the game to ensure that they make the right call as a single wrong call may deny a deserving team a chance at winning.

A stoppage may also occur if either team calls a timeout. Each team is allowed one sixty-second timeout. Teams are also allowed other shorter timeouts if a game happens to be televised nationally. The shorter timeouts may vary in length depending on the channel hosting the match in order to accommodate commercials that usually run during those breaks.

Simply put, timeouts are strategic retreats in that teams use them to talk over strategy at crucial points of a game. For this reason, one will notice that timeouts are usually called by a struggling team at instances in a quarter where their opponent is pulling away and could sink them if the team in question doesn’t address and plug the holes in their ship.

A more common example is at the end of the match where a team may call a timeout to draw up a final play to either extend or hold onto a narrow lead or formulate a game-winning shot.

An NBA game is traditionally played by two teams of five players each who matchup against each other on the court. However, its rules allow for teams to have rosters of up to 15 players so as to enable a team options as far as its player rotations are concerned. The existence of this possibility keeps a match competitive and up-tempo since players can be substituted into and out of a game in case of exhaustion, injury or an adjustment to that team’s strategic approach.

Teams may acquire players through the annual NBA draft, trades or by signing free agents who wound up their contracts with their former teams. In the modern-day NBA, franchises are known to build their rosters around one or more star players by acquiring the right role players or “pieces” to ensure that they are firing on all cylinders both offensively and defensively.

A team through their coach reserve the right to make as many substitutions as they may want provided they are not made after a goal is successfully scored. This ensures that there is order in the game by keeping only five players from either team on the court at all times.

A roster also affords a team the option to replace a player who fouls out of a game. This occurs when a player either accumulates six personal fouls in the duration of a game or commits a foul so egregious to an opposing player or is too unruly that they are ejected on disciplinary grounds through technical and flagrant fouls.

Along with the game clock which counts down the time in each quarter, there is a 24-second shot clock that governs the duration of ball possession by either team. The shot clock was introduced in the NBA in 1954. In a nutshell, either team is provided with 24 seconds within which they should make an attempt to score a goal in their opponent’s basket. Should a team fail to do so within the stipulated time, they automatically forfeit the ball to their opponents, who equally have 24 seconds to make something happen.

This rule ensures that a game remains competitive for the entire 48 minutes since either team will either be rushing to score a goal against their opponents or to defend their basket from their rival’s offensive onslaughts.

Additionally, free-throws are awarded to a player whenever they are illegally denied an opportunity to score. A player may be awarded two free-throw attempts if the violation against them is committed inside the three-point line and three free-throws if an attempt at a three-pointer is illegally obstructed.

The NBA Season and Recent Developments

Traditionally, the NBA season allowed for 82 games for every team; 41 home games and 41 away games. The record accumulated by a team after playing the 82 games would then determine if they would advance into the playoffs or start their offseason early. The top eight teams in each conference secured a playoff berth and battled it out in the playoffs for a shot at the league’s ultimate honor – the Larry O’Brien Trophy, which is more commonly known as the NBA World Championship trophy.

However, with the challenges created by the COVID pandemic in 2020, the league saw an opportunity to institute a new format where the number of games was reduced to 72 a season. In the new arrangement, which the league appears to have adopted permanently moving forward, the top six teams in either conference are guaranteed a playoff spot. The teams in positions seven through nine thereafter compete in a newly introduced play-in tournament to fill the last two playoff spots.

The play-in tournament has been received with mixed reactions across the NBA with former players claiming that it is detrimental to the sport since it may award an underserving team a playoff spot based on the outcome of a single game instead of that of an entire season. Others have applauded the league and claimed that the play-in tournament will keep the regular season competitive from start to finish and help keep teams from tanking in order to maximize their chances at placing higher in the draft lottery.

Both factions however seem to begrudgingly agree that the shortened season may have some obvious benefits such as reducing the risk of unnecessary injuries to players on account of a grueling 82-game schedule. Regardless of what school of thought one may subscribe to, we can all agree that the league and its various stakeholders should continue to do what’s best for the players, the franchises and the fans in order to move the NBA and the game of basketball forward better.