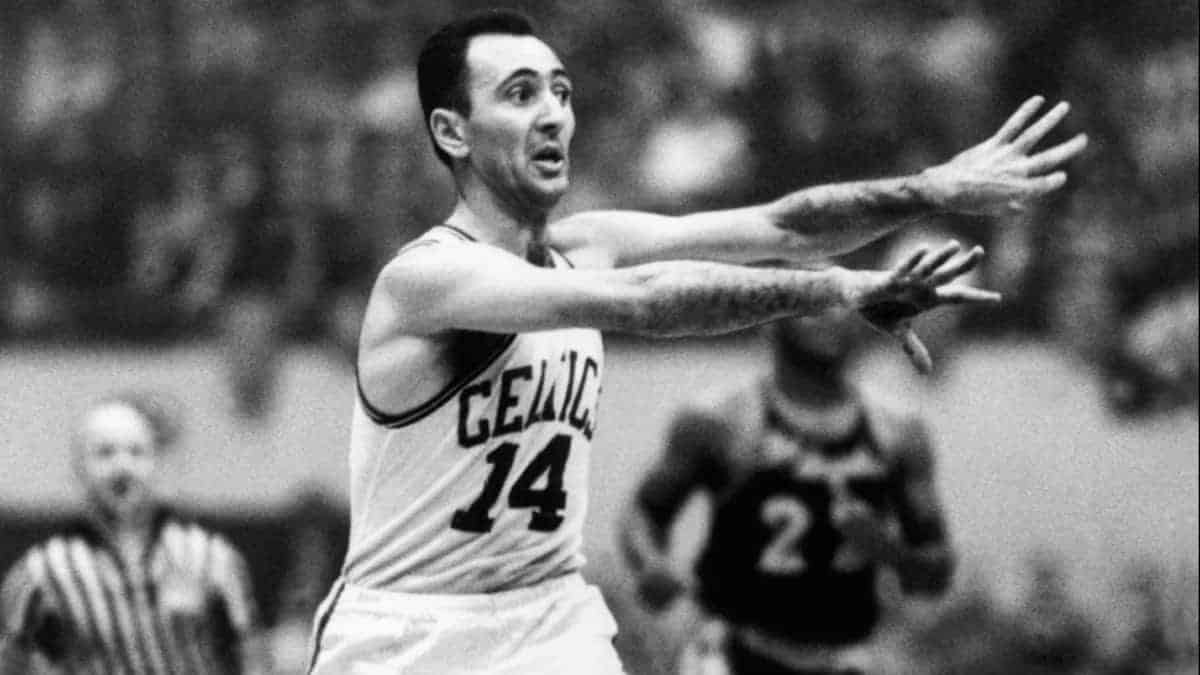 When you think about which NBA players have six rings, Michael Jordan immediately comes to mind. However, Jordan is not the only person to have won six NBA championships, there are four others who have achieved this feat. One of whom was Bob Cousy.

Bob Cousy is the epitome of the underdog basketball legend. Dropped from his high school team and overlooked at college. The Celtics didn’t draft Cousy and he only became a Celtic following another team folding. Cousy went on to be a six-time NBA champion with the Boston Celtics. Cousy brought a new style of basketball to the NBA, bringing moves such as the behind the back dribble.

Cousy changed the game of basketball within the NBA, changing the style from a static game to an active game, creating fast breaks with dynamic dribbles and passes. How did Cousy develop into this player?

Bob Cousy was a very good point guard for his time, during his playing career the point guard was under utilized. In the 1950’s and 1960’s there was not a three point line. Therefore, in the below comparison between Cousy and some of the best point guards three point percentages have been removed. We have compared Cousy to Steph Curry and Magic Johnson.

The statistics above are based per game, in the case of Cousy and Johnson for their entire career. Whereas, Steph Curry’s statistics will be subject to change. Cousy has the lowest statistic in terms of field goals made during a game however, he has the highest the highest field goals attempted ratio between the three players. Cousy beats Steph Curry when it comes to free throws made and in rebounds taken. He also beats Steph in terms of assists; Johnson obviously tops the chart in assists.

The chart and table above show that Cousy was arguably one of the best point guards in NBA history and should be considered a Great of the game.

Where did Bob Cousy go to College?

Cousy went to Holy Cross, New England from 1946-1950. Basketball in the 1940s-50s was a static game. Cousy played a street ball style of the game with an ability to play with both hands, meaning behind the back dribbles became common place when he played. Throughout Cousy’s career he was challenged due to the style of his play. It was only in his last year at Holy Cross that he received serious playing minutes.

Bob Cousy was Chosen as an All-American every year he attended Holy Cross College. At the end of his college career Cousy turned professional. This meant that he could now enter the NBA via the 1950 NBA Draft.

When was Bob Cousy drafted?

The 1950 NBA draft was held on 25 April 1950 in Chicago, Illinois. Cousy being local to Boston thought the Boston Celtics would pick him and as the Boston Celtics had the first draft pick this made Cousy confident he would play in Boston. However, Boston picked Chuck Share who was a centre. The Celtics fans wanted Cousy but the new Boston Celtics Coach, Red Auerbach, stated that he wasn’t there to please the fans, he was there to win games.

Cousy, like in his high school and college careers had been underrated by the NBA scouts and was seen as a player who would only bring glimpses of success before being found out by the opposition players. Cousy was finally picked up by the Tri-Cities Blackhawks as the third overall pick in the NBA draft.  Not happy with being chosen by a team based in the Mid-West of the country, Cousy refused to report to the Tri-Cities Blackhawks and was therefore a Free Agent. Chicago Stags picked up Cousy however, in a curious twist of fate the Chicago Stags folded. The NBA decided three Stags players could be drafted again; Cousy was one of these players who was allowed to be redrafted in a three team draft. The Celtics were invited and the player they least wanted was Cousy however, it was Cousy who was assigned to the Celtics.

When Cousy joined the Celtics they had just had a disastrous losing season. Although there had been reluctance to sign to Cousy, it became apparent that the Celtics had obtained a franchise player, even though they initially didn’t want him.

Cousy and the Celtics lost to the Nationals in 1954, 1955 and 1956. It became apparent that the Celtics needed a centre. The Celtics drafted Bill Russell. This led to the Celtics winning their first NBA title in 1957.

In 1958 the Celtics reached the NBA Finals but lost to the Hawks. Over the next six years the Celtics would dominate and win six back to back championships. Cousy put up some brilliant points scored and assist statistics during the six years of Celtics dominance. In one half, Cousy had nineteen assists which is a feat that still hasn’t been broken.

Cousy retired in 1963 and although he did come back in his 40s to play this was more a cameo than anything else. Basketball players today are paid handsomely but this was not the case in the 1960’s. Cousy set up National Basketball Players Association which was the trade union of NBA players in order to ensure that players rights are protected.

Cousy was a flamboyant player, he was able to use both hands when playing basketball. Having grown up playing basketball on the streets he brought street ball moves, such as the dribble behind the back move to the NBA, which at the time was a static game. Cousy had the nickname of ‘Houdini of the Hardwood’ due to Cousy’s moves and the way he pleased his fans with the moves he made on the court.

How many rings does Bob Cousy have?

Was Bob Cousy in Blue Chips?

Like most famous basketball players, a cameo in a basketball movie is a must. In 1994 the movie Blue Chips was released which starred Nick Nolte as the college coach who recruits basketball players to his college by offering gifts to their parents. Bob Cousy makes an appearance in the film and leads to an unscripted moment in the movie. Nick Notle is talking about cheating to get players whilst Cousy shoots free throws. Cousy doesn’t miss a free throw, Nick Notle exclaims ‘Don’t you ever miss’ Cousy retorts, ‘that’s the aim of the game get the ball in the hole.’ Cousy even shoots left handed and still doesn’t miss. A true Legend of the game.

link to How Do NBA Games Work?

So you finally found yourself with nothing much to do on a Saturday night or got invited over to your friend’s house or better yet, on a date in an arena, and you have no idea what the fuss is all...

Continue Reading
link to How much do NBA coaches make?

Coaching in the NBA is replete with responsibilities. Being a coach in the NBA is difficult, but at the same time very prestigious and profitable. How much do NBA Coaches make? As of 2021 coaches...